The universe gave us both toilets and trash cans, and each are to be used responsibly! When you flush things down the toilet, they simply don’t just disappear. By doing so, you are allowing it to enter into the waterways which will cause damage to your home, sewer system, and the environment. Below are the 7 deadly toilet sins, don't do em’!

Aside from the top 7 most commonly flushed things down the toilet, there’s still so much more you should avoid. Other common items include:

So what can you flush? Human waste. That’s it. Flushing anything not created by your body’s digestive system shouldn’t ever be flushed. One flush on a regular flow wastes 3 gallons of water, so keep home, sewers, and the environment safe and clean. If you are victim of one of these 7 deadly sins and are looking for an emergency pump repair service, call our experts at JETT Pump & Valve LLC at 248-673-2530! 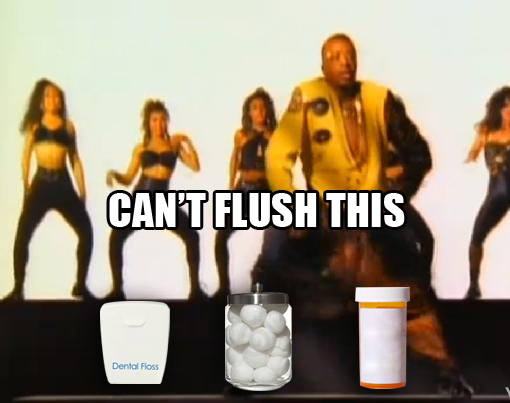 October 28 2016
Utilizing pumps on a regular basis can be a costly operation; they can run for hours at a time and require a tremendous amount of power to run. We all know (or might not know) that energy efficiency starts with motor speed control. To keep things...
Read More...

How to Read Pump Curves

June 14 2016
Pump Curves for Pump Selection 101 For those in the pump industry, learning how to read a pump curve or performance curve can be incredibly useful if not downright necessary. For us here at JETT Pump, one of the ways we apply our knowledge...
Read More...

What Happens After the Flush

May 9 2016
What Happens After the Flush? “Outta sight, outta mind” is the attitude most of us have when flushing a toilet. We don’t want to think about it or ask about it, but someone has to answer it. So what really happens after you...
Read More...

April 28 2016
Costly Clogging Problem Solved by Barnes SH Pumps #TBT Throwback Thursday! Back in 2010 the City of Inkster, MI was experiencing persistent recurring clogging- almost every 48 hours! And sometimes after only ten minutes of being unclogged!! The...
Read More...

March 25 2016
Walchem On Sale - Going on NOW! Check out the start of our Walchem Liquidation Sale on eBay! There are some new in box older model metering pumps posted right now, take a look! JETT Pump on eBay
Read More...

February 4 2016
Lift Stations: The Basics JETT Pump & Valve, LLC provides a variety of services for municipal, industrial, and commercial customers. Lift stations are commonly our patients for the services we preform. Most people are not familiar with what a...
Read More...

May 13 2013
We've added great new features and updated our content to bring you the most up to date information about our company.  Check back often for updates.
Read More...
Page: 123 - All
Contact Us